Jen Psaki held back tears in her final press briefing on Friday as she praised her back-and-forth with reporters as democracy in action.

‘I promised I was gonna keep it together,’ she said as she brushed back tears.

Psaki thanked several people, including the president, her co-workers in the White House, her team in the press office, and the reporters in the White House press corps. Bloodbath for civil service: 91,000 jobs will be axed as one in five staff are expected to go in huge shake-up that could save £3.5bn to ease cost of living crisis , and other top stories from May 13, 2022.PauseFull-screenREAD MORE

‘I want to thank all of you in this room,’ she said to the reporters. ‘You have challenged me you have pushed me. You have debated me and at times we have disagreed. That is democracy in action. That is it working. Without accountability, without debate, government is not as strong and you all play an incredibly pivotal role.’

She also thanked President Joe Biden and first lady Jill Biden for letting her serve as spokesperson for the administration.

Most of the staff of the White House press office was in the room for the briefing, including her successor Karine Jean-Pierre. Psaki’s husband Greg Mecher stood on the sidelines to watch her at work. 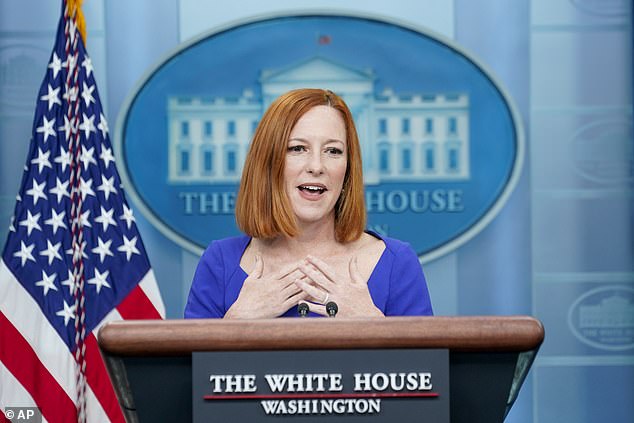