US, Japan reiterate importance of maintaining peace across Taiwan Strait 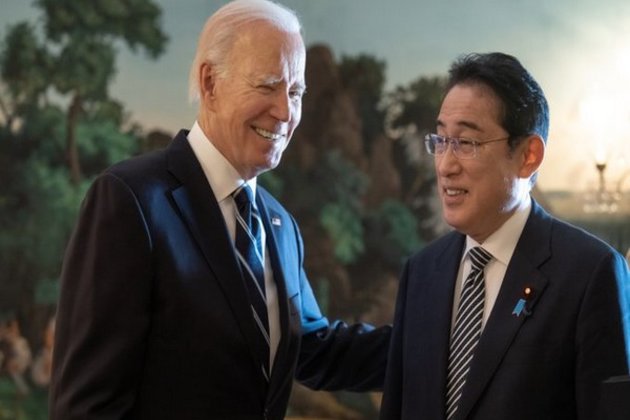 Washington [US], January 14 (ANI): US President Joe Biden and Japanese Prime Minister Fumio Kishida have reiterated their commitment to avoiding conflict across the Taiwan Strait, according to a joint statement released on Friday after a bilateral meeting between the two leaders in Washington.

“We emphasize that our basic positions on Taiwan remain unchanged, and reiterate the importance of maintaining peace and stability across the Taiwan Strait as an indispensable element of security and prosperity in the international community,” the White House said in a statement posted on its website.

“We encourage the peaceful resolution of cross-Strait issues,” the statement added.

Taiwan has been governed independently from China since 1949. Beijing views the island as its province, while Taiwan — a self-governed island– maintains that it is an autonomous country. Meanwhile, Beijing opposes all forms of contact of foreign states with Taipei.

The situation around Taiwan escalated after then US House Speaker Nancy Pelosi visited the island in early August which angered China. In successive months, France, Japan and other western countries also sent their delegations to the island, further increasing tensions in the Taiwan Strait.

After a bilateral meeting here, both Biden and Kishida directed their teams to strengthen cooperation on developing and effectively using Japan’s counterstrike. “The leaders also instructed their ministers to reinforce cooperation on the development and effective employment of Japan’s counterstrike and other capabilities,” the joint statement read.

According to the White House statement, Biden also praised Japan’s new National Security Strategy, National Defense Strategy and Defense Buildup Program. “This investment will bolster security across the Indo-Pacific and beyond and modernize the US-Japan relationship for the 21st century,” the statement said.

Biden and Kishida also urged China to do its part to enable public health officials worldwide to reduce the spread of Covid-19 and identify potential new variants by reporting adequate transparent epidemiological and viral genomic sequence data regarding the disease’s spread .

“We also call on China to report adequate transparent epidemiological and viral genomic sequence data regarding the spread of COVID-19, to enable public health officials around the world be prepared to reduce the spread and identify any potential new variants,” the statement read.

Separately in a tweet, Biden said Japanese PM Kishida has been a steadfast ally and friend to the United States. “It was my pleasure to sit down with him and discuss how we’re stepping up together to advance peace, security, and prosperity for both our countries, the Indo-Pacific, and the world,” he said. (ANI)

Factors to Consider When Getting Car Insurance Quotestop10.hernodi.com|