From a Joseph Smith photograph to David Archuleta’s decision to ‘step away’ from the church, it’s been an eventful year. 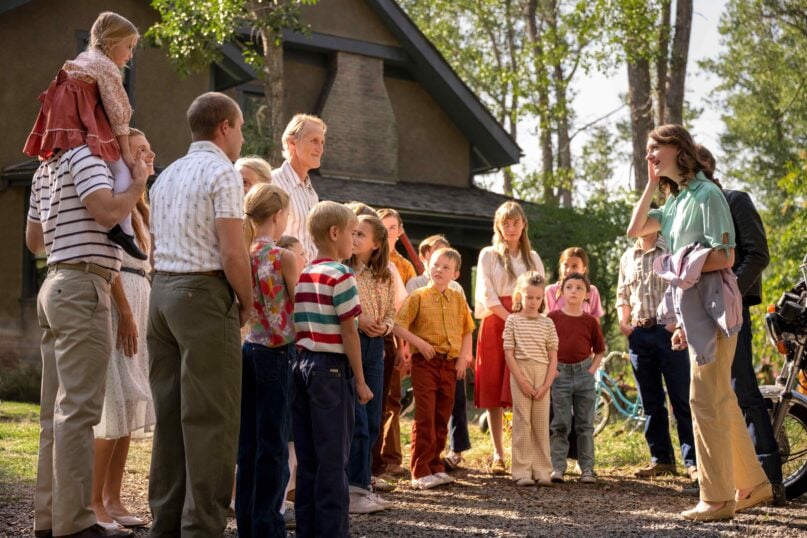 Christopher Heyerdahl as Watson Lafferty Sr., top left, and Daisy Edgar Jones as Brenda Lafferty, right, in the miniseries “Under the Banner of Heaven.” (Photo by Michelle Faye/FX)

(RNS) — The most-trafficked story at Religion News Service in 2022 was the July announcement that a Midwestern man had found a daguerreotype he believes is of the Mormon founder, his ancestor Joseph Smith Jr. This was just one of a number of high-profile stories this year that involved the Church of Jesus Christ of Latter-day Saints. Here are my picks for the top 10 Mormon news stories of 2022:

1. A descendant of Joseph Smith discovered a photo he says is of the Mormon prophet

The image, housed inside a locket that had been passed down through the Smith family, was in excellent condition because no one had been able to open the locket for years. Early tests appeared to demonstrate its authenticity, based not only on the provenance of the object but a professional comparison of the image against a famous oil painting of Smith and the “death mask” that was made of his face after his assassination.

But in the days following the announcement, controversy ensued, as various experts (as well as every random person on the Mormon internet) weighed in with their opinion about whether the daguerreotype was indeed of Smith.

2. “Under the Banner of Heaven” kicked off a spate of LDS-related television

2022 was a “banner” year for television series dealing with the Church of Jesus Christ of Latter-day Saints and other Mormon-heritage groups. “Under the Banner of Heaven” debuted in April with an all-star cast featuring Andrew Garfield, Daisy Edgar-Jones and Sam Worthington but met with mixed reviews. Many Latter-day Saints were unhappy with the liberties the series took with Mormon and American history. But “Banner” was only one of several shows that dealt with Mormonism in a mostly critical way; others included the docuseries “LuLaRich” (Amazon Prime), “Keep Sweet” (Netflix) and the best of the bunch, “Mormon No More” (Hulu).

3. The church announced its 300th temple

Although membership growth has leveled off at less than 1% a year, Latter-day Saint temple-building has increased significantly during the presidency of Russell Nelson, age 98. He has announced 118 new temples since he became the religion’s top leader four years ago. This expansion means there are now 300 temples either in operation, under construction or in the planning stages. Several have also been recently renovated and rededicated, including one in Washington, D.C. Temples are where Mormons’ most sacred rituals occur, such as marriages for eternity. 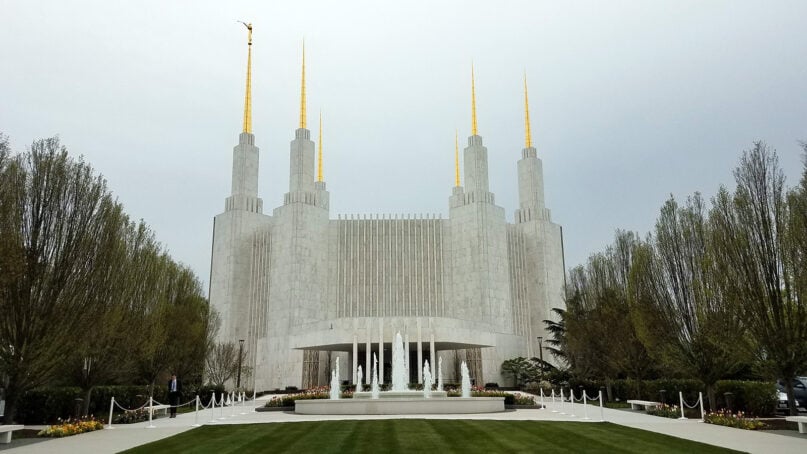 The D.C. Temple of the Church of Jesus Christ of Latter-day Saints on Monday, April 18, 2022. RNS photo by Adelle M. Banks

In August, the Associated Press released a long investigative report into how sex abuse cases have been handled in the Church of Jesus Christ of Latter-day Saints (short answer: not well).

The report focused on a case in Arizona in which a Mormon man who was repeatedly raping his daughters confessed the abuse to his bishop, who in turn phoned the church’s hotline for local leaders, which advised him not to report the abuse to the police. Since Arizona does not mandate clergy to report instances of abuse, this action was apparently legal.

An ensuing public outcry questioned whether it was ethical, especially since the lack of police involvement enabled the man to continue raping his daughters for years. In response to the AP allegations, the church issued a strongly worded statement that attempted to explain the purpose of the hotline and declare that “the abuse of a child or any other individual is inexcusable.”

5. The church revised its guidelines for youth around the world

After decades of issuing explicit instructions to youth about what to wear (and, far more often, what not to), the church announced a more hands-off approach. The new edition of “For the Strength of Youth,” released in October at the denomination’s semiannual General Conference, sounded markedly different from previous rules about dress and personal grooming. Rather than focusing on the perils of short skirts or tattoos, the revised pamphlet focused on honoring their bodies as gifts from God — with the details left undefined.

“60 Minutes Australia” reported that the Church of Jesus Christ of Latter-day Saints had exploited a loophole in Australia’s tax laws. Since donations to churches aren’t tax-deductible but donations to charities are, the church created a “charitable trust fund” to which members were instructed to send their tithing rather than to the church itself. This rerouting enabled those members to claim a tax deduction they would not have otherwise received. The reports claimed that this practice had deprived the government of AU$400 million in tax revenue and that it was unfair to other churches that followed the rules.

7. A Mormon shooter killed five people at an LGBTQ nightclub

Anderson Lee Aldrich, 22, was accused of opening fire at a gay nightclub in Colorado Springs, Colorado, on Nov. 19, killing five people and wounding many more. In the aftermath of the shooting, the LDS Church acknowledged Aldrich was an official member who “had not been active in some time.” A spokesperson went on to say it was “problematic” to blame Mormonism for the violence since Aldrich was only tangentially involved. Aldrich’s father gave an interview after the shooting in which he appeared to be more concerned that his child was found in a gay bar than he was that his child had allegedly murdered people there. “I said, ‘God, is he gay?’ I got scared, ‘Shit, is he gay?’ And he’s not gay, so I said, ‘Phew.’ … You know, Mormons don’t do gay. We don’t do gay. There’s no gays in the Mormon Church.”

8. The LDS Church announced its support for legislation to protect same-sex marriage

In an odd confluence of events, the Club Q shooting occurred just three days after the LDS Church’s unexpected announcement that it would support the Respect for Marriage Act then working its way through Congress. (The bill has since been signed into law.) Given the church’s long and controversial history of publicly working to defeat same-sex marriage in state legislatures and in the courts, most memorably with Proposition 8 in California in 2008, this appeared to be an about-face. But in reality it was a compromise that had been a long time coming. The church agreed to support the bill once it contained certain exemptions for religious groups: “non-profit religious organizations will not be required to provide any services, facilities, or goods for the solemnization or celebration of a marriage.” 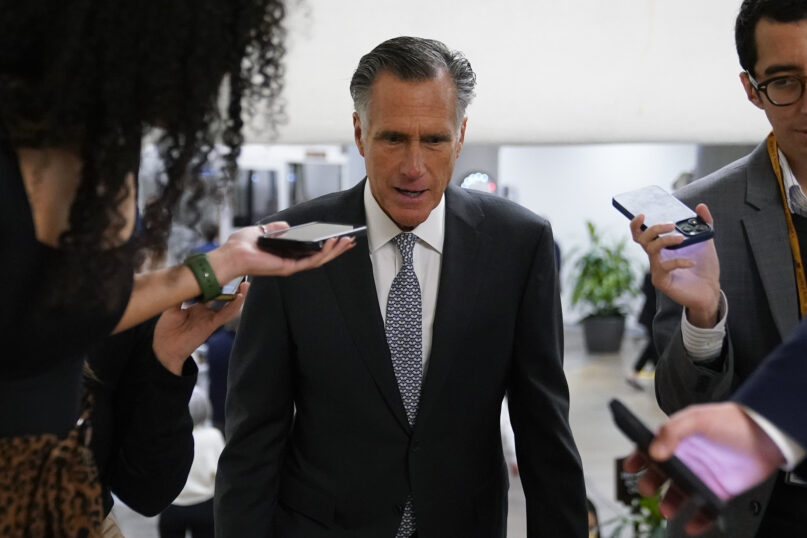 FILE – Sen. Mitt Romney, R-Utah, speaks with members of the press Nov. 16, 2022, on Capitol Hill in Washington. The Senate is set to vote Nov. 29 on legislation to protect same-sex and interracial marriages, putting Congress one step closer to ensuring that such unions are enshrined in federal law. (AP Photo/Patrick Semansky, File)

Singer and “American Idol” runner-up David Archuleta gave several interviews in which he explained his decision to “step away” from active membership in the LDS Church. Archuleta detailed a yearslong struggle with knowing he was gay but trying valiantly to make himself heterosexual — a battle that included suicidal ideation and getting engaged to three women.

After meeting with high-ranking church leaders and realizing they did not understand, he made the decision to remove himself from direct involvement in the church, which, he told “People” magazine, had been “liberating.”

“For my own mental health, I can’t keep putting myself in a place where it’s so conflicting — where they say, ‘We love you so much, but at the same time, you must change who you are.’”

In a nod to the global nature of the church, the Tabernacle Choir at Temple Square announced it will be going on the road. From now on, it plans to take a trip every year instead of every other in an effort to expand its reach outside the United States. In June of 2023, it will travel to Mexico City. In a related effort, it plans to open up spots for singers from around the world — including Mexico, Central America, South America, West Africa, the Philippines and Asia — to perform with the choir during general conference in April 2023. Finally, it plans to translate the long-running Sunday broadcast “Music and the Spoken Word” into Spanish and Portuguese, with native speakers performing the “spoken word” part of the program. 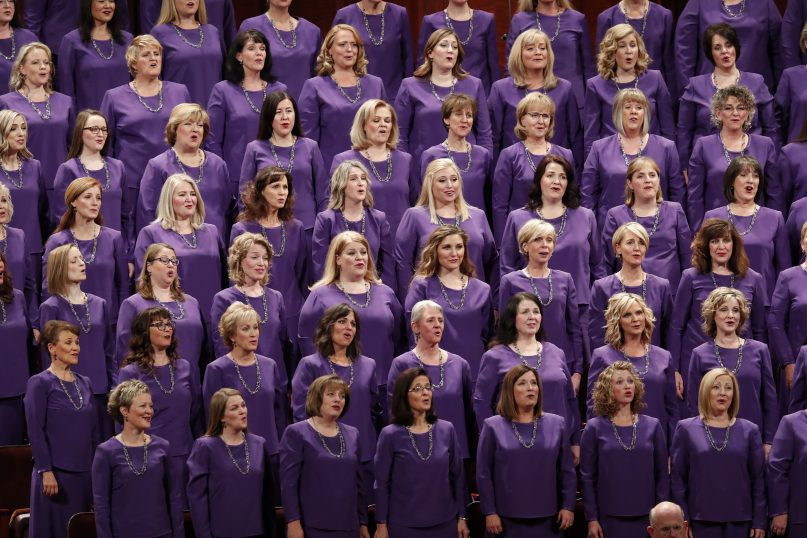 The Tabernacle Choir at Temple Square sings in the Saturday morning session of general conference on Oct. 6, 2018. ©2018 by Intellectual Reserve, Inc.