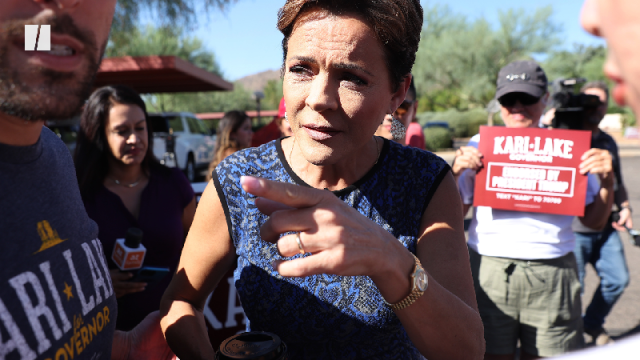 Scroll back up to restore default view.

An expert witness for Kari Lake on Wednesday got frustrated in court, ducked around questions and made admissions that contradicted Lake’s case.

Lake, the election-denying Republican candidate for governor of Arizona, started a two-day trial on Wednesday as she seeks to have her election loss overturned. A judge has already dismissed eight of the 10 claims she raised in her lawsuit. She is being allowed to make her case on the remaining two.

She is trying to prove that, one, a Maricopa County official deliberately caused a printer malfunction that lost enough votes to cost her the election; and, two, that ballots were improperly added by a contractor that handles mail ballots.

A witness called by Lake to serve as a cybersecurity expert, Clay Parikh, got into a testy exchange with Maricopa County’s attorney, Tom Liddy, as Parikh was questioned on the first claim.

Parikh ― who has spoken at election denial events organized by MyPillow CEO Mike Lindell, an election conspiracy theorist ― said he had viewed ballots that were printed in the wrong size and believes there’s no way the printer settings could have been changed by accident.

The county has acknowledged there were printer issues but has said no one was unable to vote as a result. Parikh testified that misprinted ballots that could not be read by a tabulator would be duplicated and ultimately counted anyway.

“Whether it’s accidental or inadvertent if the … [misprinted] ballot has to be duplicated, once it’s duplicated, would it be tabulated, to your understanding?” Liddy asked the witness.

Parikh didn’t answer the question, instead asserting again that the ballots could not have been misprinted without human intervention.

“It’s not even possible. That’s not possible, your honor,” he said, prompting the judge to note that his answer was “not responsive to this question.”

“Sir, are you able to answer the question?” Liddy asked.

Parikh said he was unable to answer.

Liddy also asked Parikh to disclose who paid for his travel and lodging to speak at an event hosted by Lindell, whom he referenced as “the MyPillow guy,” in Missouri.

“That would, I assume would be Mike Lindell,” Parikh said. “All the travel was arranged; he asked me to speak at the event.”