EXCLUSIVE: Tailor caught in the middle of Meghan and Kate’s bridesmaid dress row breaks his silence: Ajay Mirpuri reveals he’s NOT surprised it led to tears – and his dismay that the furore overshadowed the big day

By NEIL SEARS FOR THE DAILY MAIL

The tailor at the centre of the bridesmaids’ dresses drama at Prince Harry and Meghan’s wedding is not surprised that it prompted tears.

Luxury suit and dressmaker Ajay Mirpuri has broken four years of silence on the now infamous affair – claimed to have led to tears from the Duchesses of Sussex and Cambridge – after being tracked down by the Daily Mail.

He revealed that he saw nothing of what is said to have gone on but he and three staff had to work round the clock at Kensington Palace and Windsor Castle for four days before the 2018 nuptials after finding that none of the six bridesmaids’ dresses made by French fashion house Givenchy fitted.

Mr Mirpuri, 45, who has a showroom in London‘s West End, said he felt it was a shame that how the young bridesmaids, including Princess Charlotte, looked on the day had been overshadowed by reports of the fall-out between Meghan and Kate. 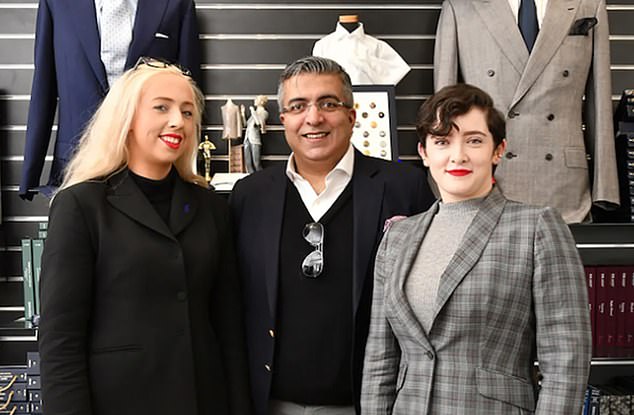 The tailor at the heart of the bridesmaids’ dresses drama at Prince Harry and Meghan’s wedding has spoken out (pictured centre: Tailor Ajay Mirpuri)