By Abel Garcia,1 day ago 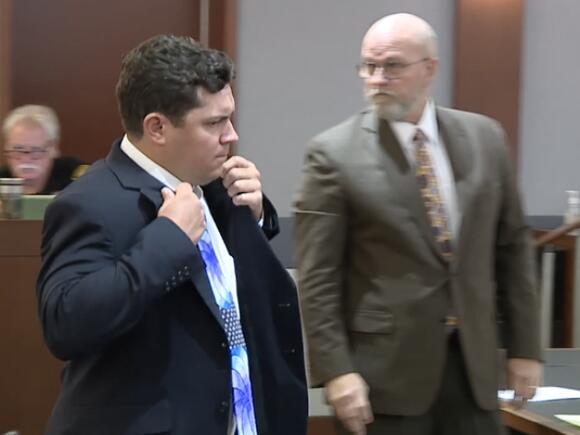 A driver in a deadly high-speed crash who killed a Las Vegas father and businessman has been sentenced to two to six years in prison with the eligibility of parole after 24 months.

More than three years ago, driver Joshua Buckingham was speeding over 100 mph through Boulder City, when he crashed into a truck driven by Randy Reiner, who was killed instantly.

Tuesday morning, emotions ran high inside a Las Vegas courtroom as the family of the crash victim described the impact of his loss on their family. While the driver will do time in prison, the family says justice was not served as they will never get their loved one back.

District Court Judge Carli Kierny sentenced Buckingham to 2 to 6 years in prison and said this was most appropriate under the circumstances that they were in.

Police say the morning of the crash, Buckingham was recklessly changing lanes and speeding over 100 miles per hour in Boulder City. He slammed into the driver’s side of 58-year-old Randy Reiner’s Ford Truck, as he left a gas station. Buckingham addressed Reiner’s wife and family in court.

“I am sincerely sorry from the bottom of my heart, this family has constantly been in my thoughts and prayers,” said Buckingham.

Reiner’s wife, Stephanie Reiner says what Buckingham did was a careless act.

“I’m still too angry to even address that because I don’t believe him,” said Reiner.

This incident was one of a handful of deadly crash cases where the Clark County District Attorney added a second-degree murder charge. The tougher penalty was intended to deter drivers from drinking and driving with the threat of homicide. However, in Buckingham’s case, the second-degree murder charge was dismissed after the Nevada Supreme Court ruled murder could not be charged in fatal DUI or reckless driving cases.

“Justice would have been keeping the second-degree, second-degree murder charge on that on the table, but they had to pull it,” Reiner said.

Stephanie says she believes harsher punishments for DUI and reckless driving are necessary. Buckingham was sentenced on a Reckless Driving charge, resulting in murder.

“I can’t even describe the loss all of us felt, all of us,” Reiner said.

Randy’s wife says her husband was a hero, and she is thankful no one was injured or killed.

14h agoare you kidding me?? I thought Boulder city was harder on crime then any place. This man killed someone going 100 miles an hour and gets a slap on the hand. Nevada has gone to the evil side. Guess my girls were right about get out while its goodReply0

Man gets up to six years for fatal crash