China Fishing Fleet Defied US in Standoff on High Seas

This summer, as China fired missiles into the sea off Taiwan to protest House Speaker Nancy Pelosi’s visit to the island, a much different kind of geopolitical standoff was taking shape in another corner of the Pacific Ocean.

Thousands of miles away, a heavily-armed U.S. Coast Guard cutter sailed up to a fleet of a few hundred Chinese squid-fishing boats not far from Ecuador’s Galapagos Islands. Its mission: inspect the vessels for any signs of illegal, unreported or unregulated fishing.

Boarding ships on the high seas is a perfectly legal if little-used tool available to any sea power as part of the collective effort to protect the oceans’ threatened fish stocks.

But in this case, the Chinese captains of several fishing boats did something unexpected. Three vessels sped away, one turning aggressively 90 degrees toward the Coast Guard cutter James, forcing the American vessel to take evasive action to avoid being rammed.

‘For the most part they wanted to avoid us,’ said Coast Guard Lt. Hunter Stowes, the highest-ranking law enforcement officer on the James. ‘But we were able to maneuver effectively so that we were safe the entire time.’ 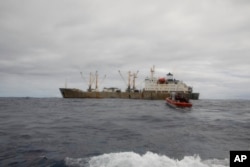 FILE – In this photo made available by the U.S. Coast Guard, guardsmen from the cutter James conduct a boarding of a fishing vessel in the eastern Pacific Ocean, on Aug. 3, 2022.

Still, the high-seas confrontation represented a potentially dangerous breach of international maritime protocol, one the U.S. sees as a troubling precedent since it happened on the Coast Guard’s first-ever mission to counter illegal fishing in the eastern Pacific.

The Associated Press reconstructed details of the never-before-reported incident from the Coast Guard and six U.S. non-military officials who spoke of the operation in greater detail but requested anonymity to avoid jeopardizing a multilateral process seeking to force China to sanction the vessels. While diplomats in China accused the Americans of acting improperly, they didn’t provide their own detailed account.

The Coast Guard’s unprecedented voyage was prompted by growing alarm from activists and governments in Latin America over the activities of China’s distant water fishing fleet, the world’s largest. Since 2009, the number of Chinese-flagged vessels spotted fishing in the south Pacific, sometimes for months at a time, has surged eightfold, to 476 last year. Meanwhile, the size of its squid catch has grown from 70,000 tons to 422,000 – a level of fishing that some scientists fear is unsustainable even for a resilient species.

As revealed in an AP-Univision investigation last year, the Chinese flotilla includes some of the seafood industry’s worst offenders, with long records of labor abuse, illegal fishing and violations of maritime law. But they’re being drawn to the open ocean around the Americas – where the U.S. has long dominated – after depleting fish stocks closer to home and fueled by an increasingly fierce race between the two superpowers to secure access to the world’s dwindling natural resources. 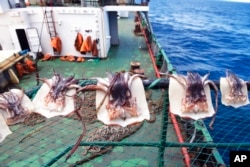 FILE – In this photo made available by the U.S. Coast Guard, squid are seen as guardsmen from the cutter James conduct a boarding of a fishing vessel in the eastern Pacific Ocean, on Aug. 3, 2022.

The illegal fishing patrol, which took place over 10 days in August, was initially kept quiet. The Coast Guard, more than a month later, released a brief statement celebrating the mission along with photos from two ships it did manage to successfully b