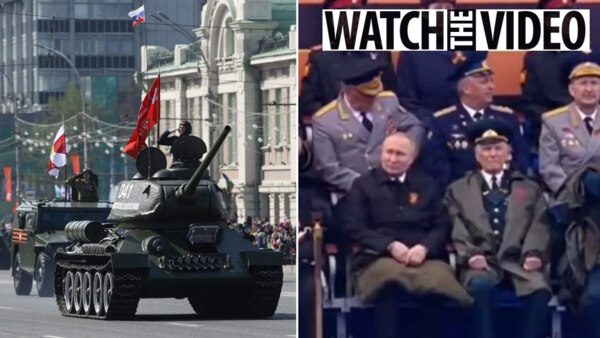 VLADIMIR Putin sat watching his meagre military parade with a thick green blanket across his legs as rumours continue to swirl around his health.

The Russian president was one of the only attendees using the covering as he sat amongst elderly World War 2 veterans while Russian celebrated Victory Day.

Putin was seated wearing a buttoned up black puffer jacket with a victory ribbon tied his chest as he watched soldiers and military vehicles roll by in Moscow’s famous Red Square.

But across his legs was a thick green blanket, which had been left for him on his seat when he first arrived at the viewing platform.

It is believed to have been around 9C at the time.

Rumours persist about the Russian leader’s declining physical and mental health – with persistent reports he is suffering Parkinson’s and is due to undergo cancer treatment in the coming months.

MOST READ IN NEWS

Putin appears to have not used the heavy blanket at first, moving and tucking it next to him when he first sit down.

Vlad then give an 11-minute speech in which he claimed Russia were fighting Nazis in Ukraine, and accused the West of planning to invade Crimea.

The slightly blunted address did not match predictions which suggested Putin would either declare victory over Kyiv or order full mobilisation of the Russian army against Ukraine.

But after his speech and when the state-controlled cameras pivoted back to him during the parade, Putin could be seen with the thick blanket covering his knees.