Marijuana and CBD have no effect on pain relief, a major review has found.

Despite pain being one of the most popular reasons for using cannabis, researchers found the products are no more effective than a placebo.

The review looked at more than a dozen studies in 11 countries involving 1,459 people from early 2000s to September 2021.

The researchers said: ‘Our team observed no significant difference between cannabis and a placebo for reducing pain.’

Official figures show around a fifth of marijuana users in the US are prescribed medical cannabis. Estimates suggest a quarter of all Americans use CBD oil, with the main reason being pain (64 per cent).

It comes after researchers at Cleveland Clinic found that cannabis users were significantly more likely to suffer pain after surgery.

It comes amid a cannabis revolution in the US with more than half of states legalizing the drug for medical reasons, including the treatment of pain. A total of 21 states have permitted its use recreationally. 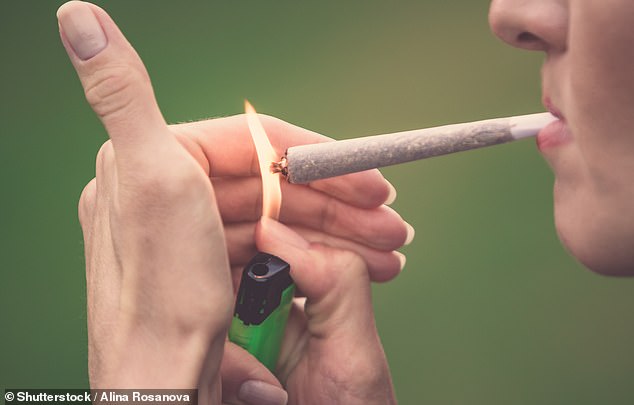 Compulsory labelling should be used in the cannabis industry to let users know how much THC they are smoking, experts say

Researchers from the Karolinska Institute in Sweden looked at 20 studies. Most participants were female and between 33 and 62-years-old.

The majority of the experiments were carried out in the US, UK and Canada, but data from Israel, the Netherlands and the Czech Republic was also included.

A variety of pain conditions were included, such as nerve damage and multiple sclerosis, as well as a range of cannabis products — THC, CBD and synthetic cannabis — taken via pills, sprays, oils and smoking.

Results showed that pain intensity significantly reduced in response to a placebo, as did cannabis.

The research paper said: ‘Our meta-analysis showed that pain was rated as being significantly less intense after treatment with a placebo, with a moderate to large effect depending on each person.’

It added: ‘In line with general principles of human perception, expectations of (possible) pain relief can modulate sensory processing and thereby reduce the perception of incoming nociceptive signals.’

The review also found that lots of participants could tell the difference between a placebo and cannabis, even though they small, taste and look the same.

Now have YOUR say! Share your thoughts in the comments.

If people knew which they were receiving, this could lead them to give a biased judgement on the effectiveness of the treatment.

The study was published in the Journal American Medical Association.