Trump’s former campaign manager: What was happening was not ‘honest or professional’

This DNC member supports Biden, but doesn’t want him to run in 2024

Bannon to Garland over Jan. 6 hearings: Indict Trump and we’ll impeach you

Viral video of women being attacked sparks fury in China

AOC calls out Gaetz, Boebert and Greene on pardons

See the severe flooding that shut down Yellowstone National Park

Is Ukraine outgunned? CNN reports on state of Russia’s war

Trump’s former campaign manager: What was happening was not ‘honest or professional’

This DNC member supports Biden, but doesn’t want him to run in 2024

Bannon to Garland over Jan. 6 hearings: Indict Trump and we’ll impeach you

Viral video of women being attacked sparks fury in China

AOC calls out Gaetz, Boebert and Greene on pardons

See the severe flooding that shut down Yellowstone National Park

Is Ukraine outgunned? CNN reports on state of Russia’s war

(CNN)Yellowstone National Park will remain closed to visitors through at least Wednesday due to dangerous flooding conditions, which have prompted park evacuations and left some in surrounding communities trapped without safe drinking water, officials say.

A Montana helicopter company transported about 40 people on Monday and Tuesday from a community airstrip in the town of Gardiner in Park County, Laura Jones of Rocky Mountain Rotors told CNN.

“We haven’t ‘rescued’ anyone that was in danger, we have mainly been transporting people out of there,” Jones said via email. “We have also taken some passengers in who had pets they needed to get to or live there and needed to get home.”

The park announced Monday afternoon that all park entrances were closed to visitors, citing “record flooding events” and a forecast of more rain to come.

The abundant rainfall and rapid snowmelt combined to produce up to three-quarters of a foot of water runoff, which is similar to the area receiving 2 to 3 months of June precipitation in only three days, according to CNN Weather calculations.

“Our first priority has been to evacuate the northern section of the park where we have multiple road and bridge failures, mudslides and other issues,” Yellowstone Park Superintendent Cam Sholly said in a statement Monday.

Enter your email to sign up for the Wonder Theory newsletter.

Want to stay updated on the latest space and science news?

We’ve got you.Sign Me Up

“Well over 10,000 visitors” were in the park, according to Sholly, who said at a news conference Monday he didn’t have an exact number, but average visitation in June can be between 15,000 and 20,000 people. 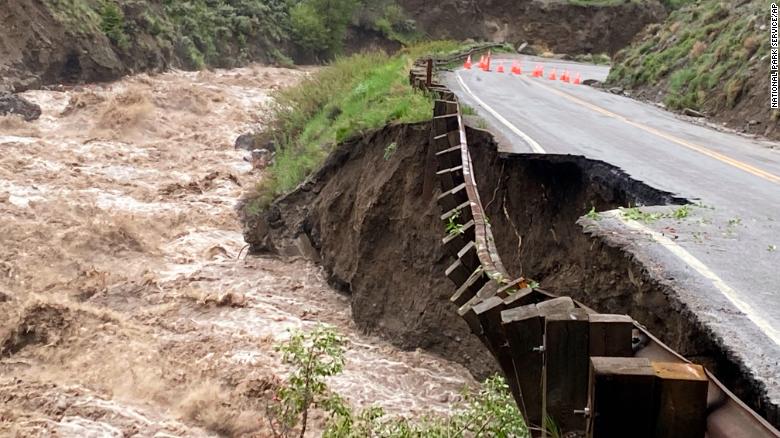 A road in Yellowstone National Park partially collapsed due to flooding Monday.

Immediately north of the Yellowstone, several cities in Montana’s Park County were also experiencing extensive flooding, which has washed out bridges and roads, making it unsafe to travel or impossible to evacuate, Park County officials said on Facebook.

Officials have also issued warnings in many areas for residents to avoid drinking local water due to a broken water main and submerged wells.

The Park County town of Gardiner, located at the northern entrance to Yellowstone, is isolated and surrounded by water after heavy flooding washed out bridges and roads, county officials said on Facebook on Tuesday.

“The water’s coming down and it’s kind of showing us exactly what kind of damage we’re dealing with,” Bichler said at a news conference.

Sholly told reporters Tuesday evening that the road between Gardiner and Cooke City will likely remain closed for the remainder of the season. He said no damage estimates are yet available.

“This is not going to be an easy rebuild,” Sholly said, referring the five-mile stretch of road most affected by the flooding. He said officials will have to assess whether it make sense to rebuild the road in that area.

Gardiner is a hub of activity in the region and the only entrance that remained open to wheeled-vehicle use year-round, according to the town website.

Across the US, a day of extreme weather prompts heat warnings, severe flooding and power outages for hundreds of thousands

CNN tried to contact Park County officials to confirm how many people are affected but has been unable to reach them.

Many roads and bridges are inaccessible, along with some railroad tracks. A few roads and bridges remain open to emergency traffic. The National Guard and local rescue groups were conducting evacuations, water rescues and airlifts.

Officials on Tuesday warned residents that displaced wildlife could traverse their properties, with bears, deer and domestic livestock already spotted.

“The river has never been this high before by my house,” said Elizabeth Aluck, who lives in Gardiner. Aluck told CNN Monday afternoon that she cannot evacuate because the roads and bridges around her home are washed out.

An Indiana family staying at a short-term rental cabin in Gardiner told CNN they were supposed to leave Monday morning, but the flooding left them stranded.

“The water levels were high on Saturday but within the past 10 to 12 hours things have gotten rougher,” Parker Manning said. “Our way out of town would be north on 89, but those roads are currently all underwater.”

See the severe flooding that shut down Yellowstone National Park 01:15

The Yellowstone River, which runs through the park and several Park County cities, swelled to a record high Monday due to recent heavy rainfall and significant runoff from melting snow in higher elevations, according to CNN meteorologist Brandon Miller.

Montana Gov. Greg Gianforte declared a “statewide disaster” on Tuesday “to help impacted communities get back on their feet as soon as possible,” according to a Twitter post.

Snow melt and rainfall across the Beartooths and Absarokas — which span the Montana-Wyoming border — have led to “flooding rarely or never seen before across many area rivers and streams,” the National Weather Service in Billings said on its on website.

The Montana National Guard had evacuated 12 people stranded from flooding in Roscoe and Cooke City, the governor said in a separate Twitter post. The National Guard said it also was responding to a search and rescue request in the East Rosebud Lake area.

Several roads and bridges are severely damaged in southern Montana and may be temporarily closed, according to an tweet from Montana’s Disaster and Emergency Services.

Across the nation in recent days, extreme weather events have battered communities, including thunderstorms that left nearly 300,000 customers without power in the Midwest, a tornado threat in Chicago, and a severe heat dome which has left more than a third of the US population under heat alerts.

Some are evacuated while others remain trapped

As several roads and bridges were rendered impassable by floodwaters, park and county officials in Montana worked to evacuate whoever they can and provide support to those who are unable to leave.

The National Guard and local search and rescue teams were assisting with evacuations and rescues throughout the county, including two air lifts and one swift water rescue, the county said.

Multiple communities in Park County were isolated and surrounded by water, including Gardiner, Cooke City and Silver Gate, an update on the county Facebook page said. Quickly rushing floodwaters have also damaged homes, as images show houses either partially or fully collapsing.

Meanwhile, several roads and bridges in Yellowstone have also been compromised by flooding, park officials say. Videos released by the park show portions of paved road washed out or severely eroded.

A bridge at Rescue Creek in Yellowstone National Park was washed out by rushing waters.

Due to predictions of higher flood levels and concerns about water and wastewater systems, the park also began moving visitors out of the southern loop of the park Monday, Sholly said.

“We will not know timing of the park’s reopening until flood waters subside and we’re able to assess the damage throughout the park,” Sholly said. “It is likely that the northern loop will be closed for a substantial amount of time.”

In June, precipitation across northwestern Wyoming and southern Montana has been more that 400% of the region’s average, according to Miller.

The dramatic increase in rain has been coupled with near-record temperatures in the region that have caused snowmelt in areas of high elevation, the NWS in Riverton, Wyoming, said. Overnight Sunday, the snowmelt made its way into streams and rivers, further adding to the floodwaters, the NWS said.

In addition to the record set at Corwin Springs, the Yellowstone River reached 10.9 feet in Livingston, Montana, Monday exceeding the area’s 1997 record of 10.7 feet, the NWS in Billings said.