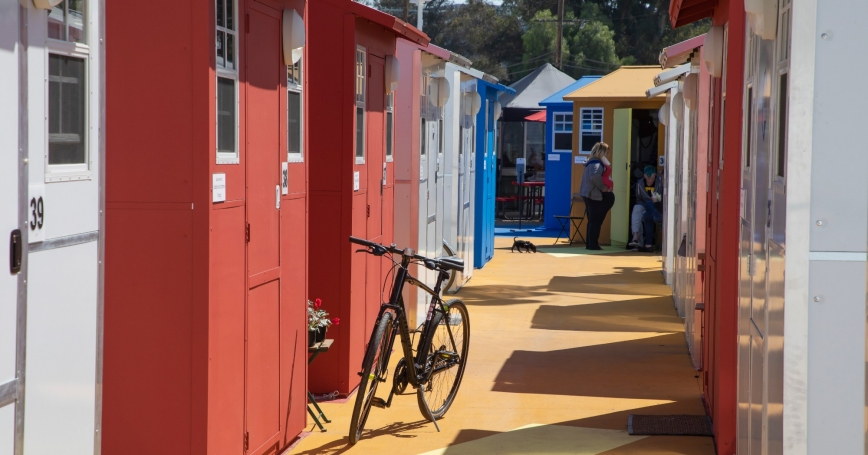 by Sarah B. Hunter and Jason M. Ward

Increasingly, the debate around reducing street homelessness around Los Angeles is focused on what to build. Should the city continue to direct most resources toward creating permanent housing with services, which has proven to be a costly and slow process? Or should it try to rapidly add more group shelters and shared tiny homes—which, under a new legal settlement, would allow the city to enforce camping bans in certain areas?

There are compelling arguments for both approaches. Over 100 people are dying on the streets each month in Los Angeles County, motivating a focus on immediate access to shelter. At the same time, shelter beds and other temporary accommodations are not long-term solutions—and, perhaps more importantly, our research suggests that few people will voluntarily leave the streets for them.

Last year we began counting individuals living on the street in three neighborhoods with high numbers of homeless encampments: Hollywood, Skid Row, and Venice. Over the first four months of our study, the number of unhoused people in these neighborhoods grew by an average of about 17 percent.

We also surveyed more than 200 people experiencing homelessness in the same neighborhoods. About 90 percent of our respondents expressed interest in being offered housing, but only 30 percent said they would move into a group shelter. By contrast, more than 80 percent would accept one of multiple types of private accommodations, including a hotel or motel room or permanent supportive housing.

The housing on offer isn’t perceived as meeting basic human needs for autonomy, privacy, safety, and security.Share on Twitter

These findings echo what we learned from our earlier longitudinal study of veterans experiencing homelessness around West Los Angeles. The housing on offer isn’t perceived as meeting basic human needs for autonomy, privacy, safety, and security. If shelters or transitional housing require sharing rooms, have curfews and other rules, or reduce people’s sense of self-determination—our research suggests these won’t be an effective approach to reducing street homelessness.

Indeed, nearly half the people we surveyed in Hollywood, Skid Row, and Venice said that they had been offered some form of housing since becoming homeless. About one-third reported being on a waiting list.

The most common reason cited for not moving into housing (41 percent) was that they hadn’t been contacted to complete the move-in process.

This highlights another critical weakness in the current homeless service system. Once a caseworker assesses an individual, their data is put into the county’s coordinated entry system to determine eligibility for various housing resources. When that resource becomes available, the caseworker then must re-contact that person to get them into housing.

But the city makes this harder with policies like sanitation sweeps of encampments, which require individuals to move all their belongings or risk losing them. This often prompts unsheltered individuals to move on from a known location, causing delays or a total loss of contact.

Low wages and burnout also lead to high rates of job turnover among caseworkers, exacerbating the problem. Each failure to find an eligible client contributes to longer wait times, which snowballs into more difficulty finding the next eligible person. As one homeless service provider explained: “Housing and shelter resources, they don’t just sit there waiting. If someone gets matched to something, we need to find them pretty quickly. Otherwise, they lose that possibility.”

Permanent housing resources are already scarce; delays and bureaucratic hurdles also can lead them to be significantly underutilized.Share on Twitter

Permanent housing resources are already scarce; these types of delays and bureaucratic hurdles also can lead them to be significantly underutilized.

The public is legitimately frustrated with long-term encampments and local government’s seeming inability to remedy the problem. Since 2016, voters have approved billions in bond measures and taxes dedicated to the crisis, and yet street homelessness appears to be worsening. But it will do no good to respond to this political imperative with policies that are ineffective.

Our research suggests that stepping up group shelters and camping bans—policies promoted by some members of the Los Angeles city council as well as mayoral candidates—are unlikely to make a noticeable difference in street homelessness and may make an unacceptable status quo even worse.

Sarah B. Hunter is a senior behavioral scientist at the nonprofit, nonpartisan RAND Corporation, and director of its Center on Housing and Homelessness in Los Angeles. Jason Ward is an associate economist at RAND and associate director of the center.

This commentary originally appeared on Santa Monica Daily Press on May 21, 2022. Commentary gives RAND researchers a platform to convey insights based on their professional expertise and often on their peer-reviewed research and analysis.

Get weekly updates from RAND.EmailSIGN UP