California is about to experience a political earthquake. Here’s why 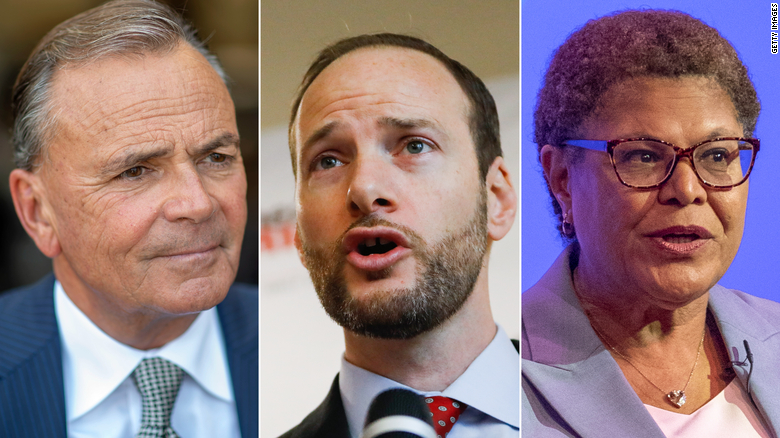 (CNN)An earthquake is building in Tuesday’s California elections that could rattle the political landscape from coast to coast.

In Los Angeles and San Francisco, two of the nation’s most liberal large cities, voters are poised to send stinging messages of discontent over mounting public disorder, as measured in both upticks in certain kinds of crime and pervasive homelessness.

That dissatisfaction could translate into the recall of San Francisco’s left-leaning district attorney, Chesa Boudin, likely by a resounding margin, and a strong showing in the Los Angeles mayoral primary by Rick Caruso, a billionaire real estate developer and former Republican who has emerged as the leading alternative in the race to Democratic US Rep. Karen Bass, once considered the front-runner.

Linking both these contests — as well as several Los Angeles City Council races and an ongoing effort to recall George Gascon, Los Angeles County’s left-leaning district attorney — is a widespread sense among voters in both cities that local government is failing at its most basic responsibility: to ensure public safety and order. It’s a sentiment similar to the anxiety over urban disarray that inspired the “broken windows” policing theory during the 1980s, and contributed to the election of Republican Mayors Rudy Giuliani and Richard Riordan in New York and Los Angeles, respectively, amid the cascading violence of the crack epidemic in the early 1990s.

8 things to watch in Tuesday’s primaries

Tuesday’s California results will likely send a stark message to the Democrats controlling Congress and the White House. The outcome will again underscore how much danger a party in power can face when voters feel that certainty has been stripped from their lives — a dynamic that extends beyond crime and homelessness to inflation, soaring gasoline prices and continued disruption from the unending Covid pandemic.

“In the broadest perspective, the voters and residents are feeling that the governing regime, the liberal Democratic regime that has dominated LA for the last 30 years, and California and San Francisco, is not meeting the moment,” says Fernando Guerra, a political scientist who directs the Center for the Study of Los Angeles at Loyola Marymount University.

Enter your email to subscribe to the CNN Five Things Newsletter.

You give us five minutes, we’ll give you five things you must know for the day.Sign Me Up

Zev Yaroslavsky, who served on the LA City Council and then the LA County Board of Supervisors for almost 40 years starting in 1975, says the only time he can remember Los Angeles voters as discontented as they are today was in the late 1970s, an era of high inflation and soaring property tax bills that produced California’s Proposition 13 and the tax revolt that helped elect Ronald Reagan president in 1980.

Los Angeles City Council President Nury Martinez, who took office in 2013, feels those gusts too. “I’ve never seen a more angrier electorate than this particular election,” she told me. “I think all of this is just at a boiling point.”

The dominant role of crime and homelessness in the Los Angeles and San Francisco elections represents an inversion of the political agenda since the summer of 2020. Like dozens of other cities, both places saw protesters for police reform fill the streets following George Floyd’s murder. In Los Angeles, that energy helped propel Gascon to a narrow victory over the law enforcement-backed District Attorney Jackie Lacey in November 2020 and also powered voter approval of a ballot initiative to combat racial inequities by shifting county funds toward social services and alternatives to incarceration.

Boudin, the San Francisco district attorney, who was narrowly elected in 2019, and Gascon have pursued largely parallel agendas centered on reducing incarceration through measures such as a virtual prohibition on trying juveniles as adults, the rejection of “enhancements” (for such factors as gang involvement or use of a gun) that extend sentence lengths and a policy of not prosecuting “quality of life” misdemeanors associated with homelessness, such as trespassing and public urination.

That agenda quickly faced fierce resistance from other elements in the criminal justice system committed to traditional approaches, including the unions representing police in both cities. Law enforcement interests are backing the recalls against Gascon and Boudin, and in LA the police union is spending heavily against Bass, a leader in the House of Representatives’ passage last year of sweeping federal police reform legislation. The recall efforts against Boudin and Gascon, as well as Caruso’s mayoral bid in Los Angeles, have also drawn support from big Republican donors, who constitute a distinct minority in both cities.

The role of both law enforcement insiders and conservative donors and activists has frustrated advocates for police reform, who see the backlash across these many fronts as an attempt to restore hardline approaches before new alternatives are given a chance to demonstrate whether they can succeed.

Take a look at our streets: No matter where you live now, you can walk down the street, you can look out your front window, and you will see … that what the city and the county have been doing simply is not working.

“I think to a very large degree that more conservative forces have been very, very adept at framing the issues of homelessness and of crime so that the discussion about … how to respond to those two issues is very, very narrow,” says Los Angeles City Council Member Mike Bonin, an outspoken liberal who is not seeking reelection this year after narrowly avoiding a recall drive centered on his resistance to tougher measures against the endemic homelessness across his Westside district.

Yet the evidence is overwhelming that the unease dominating Tuesday’s elections extends far beyond conservative circles. Yaroslavsky points out that in the UCLA Luskin School’s annual polling across Los Angeles County, concern about crime has increased substantially not only among Whites, but among Hispanics, Blacks and Asian Americans as well.

Ben LaBolt, a San Francisco-based Democratic strategist and former campaign spokesperson for Barack Obama, likewise notes that prominent local Democrats have played leading roles in the effort to recall Boudin. “The notion that this [recall] is some right-wing misinformation campaign is dangerous for Democrats to say or think, because it’s definitely not,” he says.

In both cities, anxiety about public safety is rising faster than the actual trends in reported crime. The online dashboard maintained by the San Francisco Police Department shows that through May 29 (the latest week for which figures are available) burglaries and break-ins or thefts of motor vehicles are clearly up from the comparable period in 2019, before Boudin took office. But assaults and homicides are virtually unchanged over that period, and robberies are down, as are the total number of serious offenses.

In Los Angeles the trends are more consistently troublesome: The Los Angeles Police Department’s tracking system shows that through late May both property crimes and violent crimes had increased substantially over the comparable period in 2020 (before Gascon’s election). But even in LA, both violent and property crimes remain a small fraction of their elevated levels in the 1990s and well below their rates for most of this century’s first decade.

“We are not seeing numbers that look anything like some of the worst eras that people have been through,” says Michelle Parris, California program director at the Vera Institute of Justice, speaking on behalf of Vera Action, a criminal justice advocacy group. Moreover, she points out, California communities with tough-on-crime policies like Sacramento and rural Kern County are experiencing crime upticks that in some cases exceed the increases in Los Angeles and San Francisco. “We’ve seen that even tough-on-crime prosecutors in California have not delivered safety,” she says. “They are subject to the same exact trends we are seeing around the country.”

A problem with high visibility

Like many other observers in both cities, Parris points to a different cause than crime per se as the primary driver of rising anxiety over public safety. “Homelessness and untreated mental illness … impacts people’s perception of safety,” she says. “And so I think that’s part of why in places like Los Angeles or San Francisco in particular, where [that] is quite visible, that has a great impact of what people are talking about.”

In both cities, pervasive homelessness has rekindled the concern about losing control of city streets that inspired advocates of the “broken windows” theory to argue 40 years ago for greater enforcement against crimes of “disorder” like loitering, panhandling and public intoxication. In San Francisco, concern has centered on the Tenderloin neighborhood, which has been overwhelmed with open drug use among the homeless. In Los Angeles, the mayoral and City Council races have been dominated by concerns about the spread of large homeless encampments across the city. These encampments have proliferated despite the approval of two ballot initiatives in Los Angeles in 2016 authorizing substantial expenditures to build housing and provide services for the homeless — and the City Council’s passage of an ordinance last fall authorizing the removal of encampments around sensitive areas such as schools, libraries and day care centers.

“Take a look at our streets: No matter where you live now, you can walk down the street, you can look out your front window, and you will see … that what the city and the county have been doing simply is not working,” says Martinez, the LA City Council president.

Yaroslavsky, the former city and county official, says the persistence of the homeless encampments has become a viscerally visible symbol of fundamental governmental failure. “I think homelessness is both a real issue but it’s also a metaphor for everything else that’s gone wrong in society and government’s ability to address something that is so visible and so ubiquitous in the county,” he says. “So it’s like a billboard that says failure.”

My last email to the mayor’s office was that, amongst other things, we just had a massacre in Texas, an unstable man who was ignored, but it’s not like people didn’t know he was unstable. We have a park of mentally unstable people currently slashing and shooting each other. What would make us think this wouldn’t turn into something much more tragic?